My hubby came from work with this Nanta Pizza and Chicken. Cool! I'm so hungry so he came on time with pizza and chicken. I was about to cook noodles to obey my hunger but he came before I moved from my seat. It's really great to have this kind of fast food on weekend when the weather is cold and when you're lazy to move from lying on the sofa while watching TV.

Good job my dearest hubby! I'll help myself with this pizza and chicken. 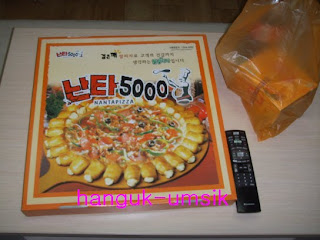 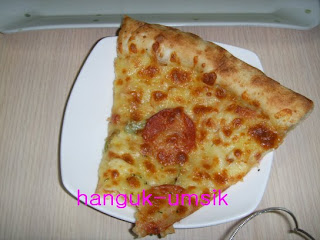 It's triple x so it's absolutely related to sex. You will be surprised with the pictures. I don't know if you've ever seen this pussy pictures before. I'm warning you! You must be over 18 years old to open the links.

Congrats if you're 18 years old and above because you can have fun watching the pictures. Enjoy!

Live octopus are famous for fingerfood specially when people drink soju. My hubby doesn't drink but it's his favorite. Not so many foreigners can eat live octopus but I do. I learned to eat them when I was working at the institute and my boss ordered some live octopus while we were drinking soju. Everyone was eating so I tried a piece of leg. The leg was still moving and I was a little scared to put it in my mouth but I tried. I just thought that I had to eat because everybody was eating. Besides if I would live here in Korea with my Korean husband, I had to learn to eat everything that koreans eat. So I bravely put the moving piece of an octopus leg in my mouth. It stuck on my tongue so I bit it many times but I felt that the more bite I did, the more legs stuck on my tongue so I swallowed it instead. Again, it almost stuck on my throat. I was scared but luckily after trying to eat some other food on the table, it went throughout my stomach. I felt relieved. Since then, when my hubby eat some live octopus I also eat with him and now I can eat as much as my hubby does. Sometimes I eat more than him because I heard that they are good for our health specially for the skin.

Here's the picture of live octopus that we had in my hubby's aunt's house. Hubby's aunt lives near the sea and everytime we visit her, she serves live octopus and raw fish for my hubby because she knows that they're my hubby's favorites. 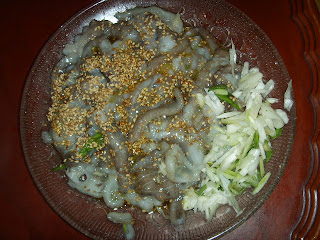 Dip the octopus with sauce like salt with sesame seeds and sesame oil or chokochujang or vinegared chilli pepper paste.

Posted by Unknown at 2:59 PM No comments: