Carbonara is my favorite spaghetti but not my hubby. My hubby doesn't like spaghetti much so when we go to the restaurant, we rarely order carbonara spaghetti because my hubby thinks it's greasy.

When I went to the supermarket, I decided to buy carbonara sauce and spaghetti noodles so I made some at home. 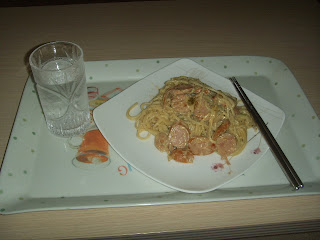 My hubby said he doesn't want to eat some so I only made a plate of spaghetti for me. Doesn't it look yummy? I put some sausages. It doesn't look and taste the way I expected but at least I had some and made it by myself.

Here's the steps that I made. I put the noodles in a boiling water with salt. While boiling, I fried the cut sausages and put a half of jar of sauce that I bought in the supermarket. After a few minutes, I put the noodles and mixed in the sauce. That's it! Just as easy as that! Come on! You can also make it! You don't have to spend too much at the expensive restaurants when you can make for less than $10 for two or three people.

Posted by Unknown at 2:14 AM No comments:

My hubby's office is near Lotteria, a hamburger shop like Mc Donalds or Jollibee but Lotteria is from Korea originally. They also have branches in Vietnam. I saw some of them when I visited there and maybe in Thailand, too. I may also see one there.

Sometimes, my hubby calls or sends me messages asking if I want to have a hamburger and if I say yes, he would bring a set of hamburger, coke, french fries, ice cream, and tacos or snack wrap. 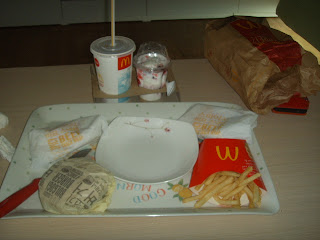 But I have to eat with my hubby because I can't eat them all. We eat half of each but he always buys two snack wraps. They are yummy and not big enough to share or divide.

By the way, when we really crave for hamburgers, we sometimes get to be delivered at home. They also deliver hamburgers but you have to pay extra amount for the delivery fee and there are 24-hours shops open. One of them is in the other supermarket which is just 5-minutes away from our building.

Posted by Unknown at 1:43 AM No comments:

My hubby has sweet tooth that's why he loves chocolates. When I go to the supermarket, chocolates is always in my list. I used to love chocolates too but not anymore not because I'm afraid of gaining wait but because I'm tired of eating them. Now a days, my hubby enjoys eating M&M chocolates so I always have to buy two types of them. The plain and the peanuts flavor. Instead of snacks, he eats chocolates while watching TV. 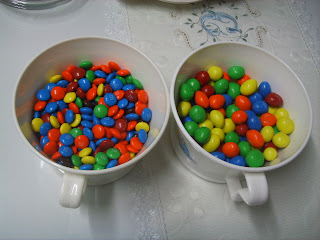 I remember when I was young, I always longed to eat chocolates and when I buy even the cheapest and not yummy one, I felt very happy. M&M's were the ones that I always wanted to have even the fake ones. But now, I can't eat much chocolates and I don't think they are delicious at all.

I always go to the big supermarket which is just across our apartment building and there are lots of different kinds of food from local to imported that's why for me chocolates, snacks, and desserts are not special anymore. It's just because I can buy anytime I want. Maybe if the supermarket is far from us, eventhough I crave for them, I can't buy and eat them because of my laziness to go to the market. But everytime I go down from my apartment, the supermarket is always in front of me, that sometimes even when I have nothing to buy, I just go inside and it attracts me to buy something. Sometimes, I'm shy to get inside and go out without anything on my hand so I buy at least chocolates or snacks which make me tired of eating them now. But I have to buy always because when my hubby doesn't want to smoke, he eats something instead of smoking so we must have them at home.

Posted by Unknown at 1:01 AM No comments:

When we went to Gunsan to meet my hubby's friend, he invited us to have kalguksu or marine chopped noodles. From his place, we drove for about 30 minutes to get to the famous marine chopped noocles restaurant. It was a little bit far but it worth it eventhough we had to get back from where we've been to, to take him home.

The place is famous for kalguksu and there are lots of restaurants with the same menus but we went to the one with lots of people (That's what we always check when we go to restaurants that are not familiar to us. If there are many customers, then the food is delicious.) to make that the food is good. So, we decided to eat to Somunan Kalguksu or Rumored Traditional Chopped Noodles. 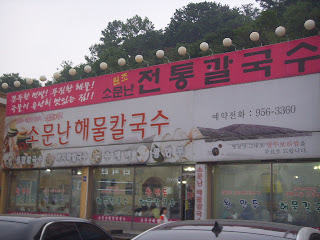 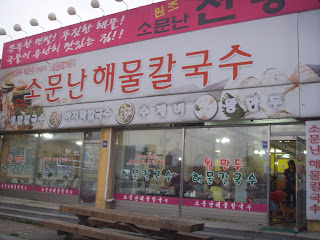 We ordered good for three people and here's what they gave us. 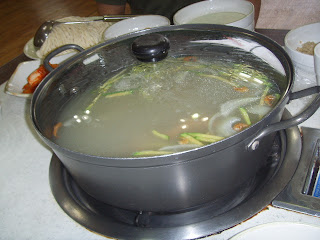 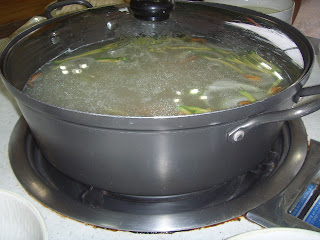 Oh wow! It's too much! But we almost had it all. We were very full and we were very satisfied with the food because it was yummy. But there was a problem with the service. Maybe because there were lots of customers but that wasn't a reason not to serve the customers well. Hubby's friend asked some more kimchi (you can get refill in all side dishes in the restaurant here in Korea) and the waitress passed several times without giving us anything. Then he thought maybe she forgot about it then she told her again but still nothing came on our table. How much is one minute to get some kimchi? I tried to understand her because she was tired. Then finally, the kimchi came but I was already annoyed. 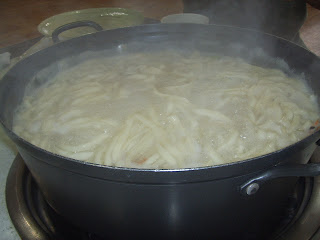 Except noodles, they also serve brown rice and of course side dishes which is normal to all restaurants to serve different kinds of side dishes. 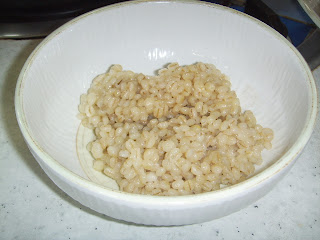 Near the parking lot, there's also a small amusement park, so after having yummy marine chopped noodles, you can have fun or send your kids to amusement park. 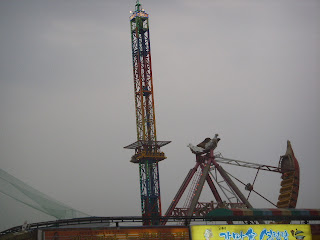