Except from Kimchi, Korea is also famous for its noodles. Most of their noodles are too spicy. I've been living in Korea for more than 10 years but I've never seen cheese noodles until I saw a program on TV where they indorse some famous food in a convenience store. They said they are the most popular food in the stores and some people don't know about them. I don't go to convenience store except when I go with my hubby when he buys cigars. We have a supermarket just in front of my apartment building so I don't need to go to convenience store.

I got interested in the one of the food that they show, the Cheese Cup Noodles. I love cheese and I wonder what it tastes in noodles. At first I thought it's yucky because cheese and noodles don't sound good to be blended. But still, I want to try it. So when my hubby went to the market, he bought a cup noodles for me. He tasted it and he didn't like it much but for me, it's really yummy!

Here's what it looks like. Doesn't it look yummy? 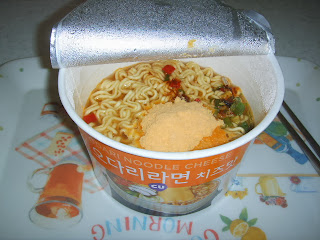 Like regular cup noodles, just pour some hot water in your noodle, put the seasonings and when it's readyor when the noodle is soft, put the cheese and mix it. Wow! Try it! You may like it too if you like cheese.