Our Meals at Bangjangsan Campsite

We went camping in Bangjangsan Recreation Forest and here's what we had at the camp site.

We usually order chicken at home and bring it at the camp site and have it for lunch. So here's our lunch. Some chicken, eggs, hot pepper and kimchi. 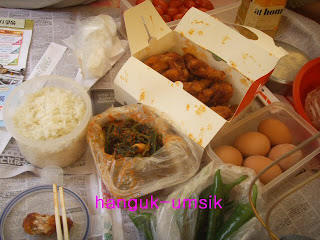 We arrived at the camp site at late noon so we had lunch late. But before it gets dark, we decided to have dinner. And because we aren't hungry, we just had eggs, fruits and yoghurt. Our left over from our lunch and dessert. 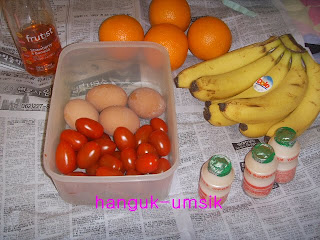 I remember that I forgot to wash the dishes at home when we went camping in Hwemunsan Recreation Forest. At that time, I also forgot to bring dishwashing liquid. So, here I washed them at the camp site. 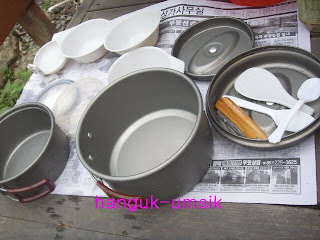 We don't usually have breakfast at home because we always sleep and get up late but at the camp, we have to sleep early and get up early. We are so hungry after getting up unlike when we're at home we always have midnight snacks but in the camp we can't because we are asleep at midnight. But it's still hard to have rice for breakfast so we just had bread and coffee. 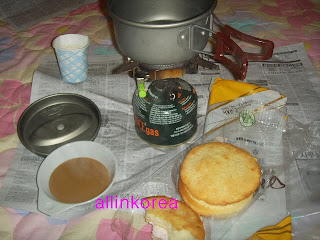 Posted by Unknown at 3:04 PM No comments:

Since we are living here in Jejudo, my in-laws came to visit us. First, my mother in law, next my sister in law and her family, then my brother in law and his family, and last my hubby's cousin and his wife. There are still coming on the list. It's a good chance for them to visit the famous place which is now one of the N7W. YES! Jejudo won the N7W that has just announced last week.

It's a little bit uncomfortable to have visitors but also enjoyable. We have to bring our visitors to some famous places. We recommended some good attractions to them and we guide them.

When we have visitors, we always have barbecue on the porch in a lodge that we are renting now. It's big and it's a great place for barbecue because there are lights surrounded to it. Well, here we are having barbecue. That's my hubby's hands cutting samgyopsal (korean barbecue). 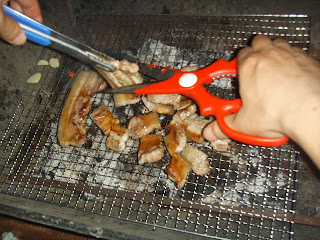 My hubby again cutting sausages and my sister in law holding the plate. 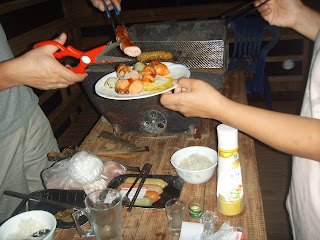 We also had rawfish and maeuntang (fish soup) that my sister in law bought. She's also the one who cooked the delicious soup. She's really a good cook. I learned on how to cook from her. 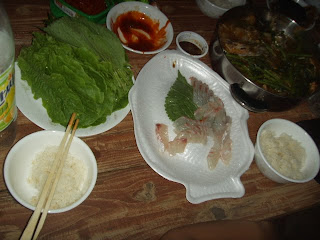 Posted by Unknown at 9:10 PM No comments:

My hubby went to the supermarket and saw the signboard chinese restaurant. He got off his car and asked for a business card. The next day, my hubby called and he told them to prepare tangsuyug and champeong and we were gonna pick it up after 30 minutes. They can't deliver the food to our home because it's far.

After 30 minutes we drove to the restaurant and picked it up. Here's tangsuyug and champeong was still in the restaurant. The waiter forgot to put tangsuyug in the plastic bag so my hubby called and the owner said they would deliver the champeong instead. Good! Because it's a bother to pick it up again. Besides it was their mistake. Anyway, it seems like the boss is kind enough so they delivered champeong to our home. 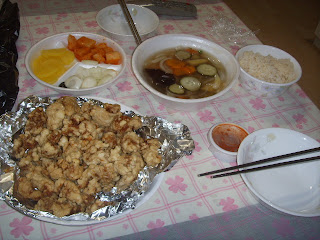 The sauce. It looks and taste much different from most Chinese restaurant. 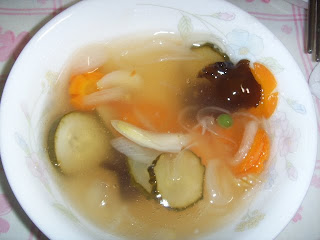 Here's the champeong. It was late but we were satisfied with the service. I think they intended to put much in the bowl and make it more delicious. 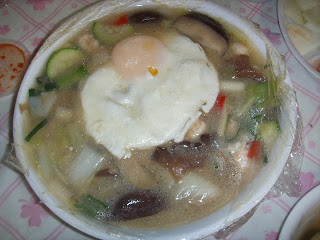 Hmmmm... the most delicious tangsuyug and champeong that I've ever tasted in Jejudo. 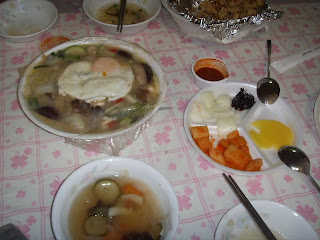 The restaurant is near Hallim Hospital (Hallim Pyeongwon). From Hallin Hospital, go straight and you'll see a bus stop. Across the bus stop is Boyeong Chinese Restaurant. You won't miss it! It's next to Hallacom 119.

Posted by Unknown at 2:35 PM No comments:

I've been staying here in Jejudo for many months and most of the restaurants that I've been to don't serve delicious food. So it's better if you go to the franchised restaurants because you can make sure that the food is good. Unlike other restaurants who just served expensive menu but the food doesn't taste good. You will just be disappointed. They are just the kind of restaurant who served and say goodbye. Maybe they think that because you are a tourist, you can't meet each other again or even when they serve delicious food, you can't go back again, anyway.

Well, we decided to stay here for a long time so we are looking for restaurants who served delicious food so to make sure that the food is great, we usually go to franchised restaurant like Chaesundang. It's our fourth time to visit this restaurant and the waitresses already know us. They treat and serve us well.

If we go there for lunch, we order the Jomsim Teukson Set A. A well-being shabu shabu for only 7,000won each person. Chaesundang serves fresh vegetables. 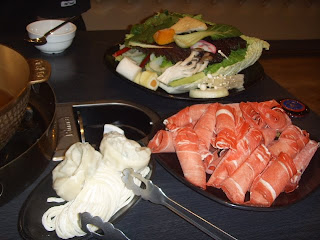 Shabu Shabu is a menu where you soaked the fresh meat and vegetables on the boiling soup. 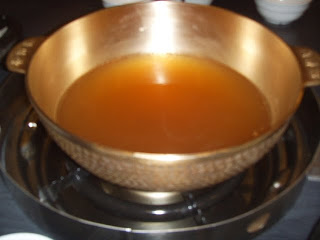 It's up to you which vegetables you want to put first. Or you can put all at once. 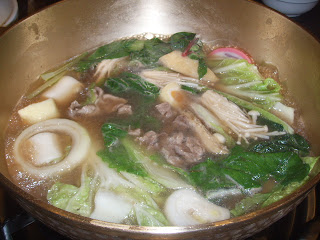 When the vegetable and meat is cooked you dip it with the sauce. 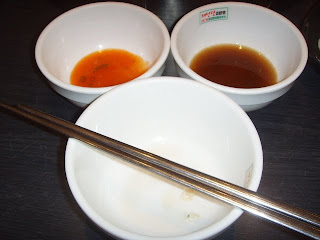 There's also some dumplings and noodles which is eaten after eating the vegetables and meat. When you're done with noodles, there will be soup left and the soup is used to make porridge. The porridge is served last and it's included in the 7,000won menu. It's cheap isn't it? I don't have the picture of porridge because even it's free, we didn't eat because we were already full and there was no place for porridge when I decided to take my camera.

Chaesundang Jejudo is in Jejusi Nohyeondong 1042-5. Or call 064-747-3655 if you want to know more or visit www.chaesundang.co.kr for more information.

Posted by Unknown at 8:58 PM No comments: